163819038029.11.2021 hrs 14:53
Earlier this autumn we heard the news about many volcanic eruptions on the island La Palma in the northern Canary islands of Spain. There has been many big volcanic eruptions around the world through history. In many cases these have had a vast impact on history. One of these volcanic eruptions occurred in 79 AD. At this time the volcano Vesuvius 10 kilometers southeast of Naples erupted. This influenced among other things the style that now is represented at Hertonäs Manor for all to be seen. How is the volcanic eruption reflected in the present exhibitions? How does the Antique period still affect what is displayed at Hertonäs Manor? In this blogtext I will focus on this theme. Read more below for more information about Vesuvius and Antique influences on Hertonäs Manor.

The famous eruption of Vesuvius was simultaneous with a vast earthquake in the area. These contributed to the fact that the Roman cities of Pompeii and Herculaneum were devastated by stone, ash and a big cloud of smoke. The Roman writer Pliny the Younger recollected the devastation in his letters. The city of Pompeii was lost until the 1590s. During the building of an underground waterchannel the ruins of the antique city were found. Herculaneum was found by accident during excavations in 1738. Ten years later, in 1748, a vast archaeological investigation was started in the area. The discovery of Pompeii could be archaeologically states in 1763. 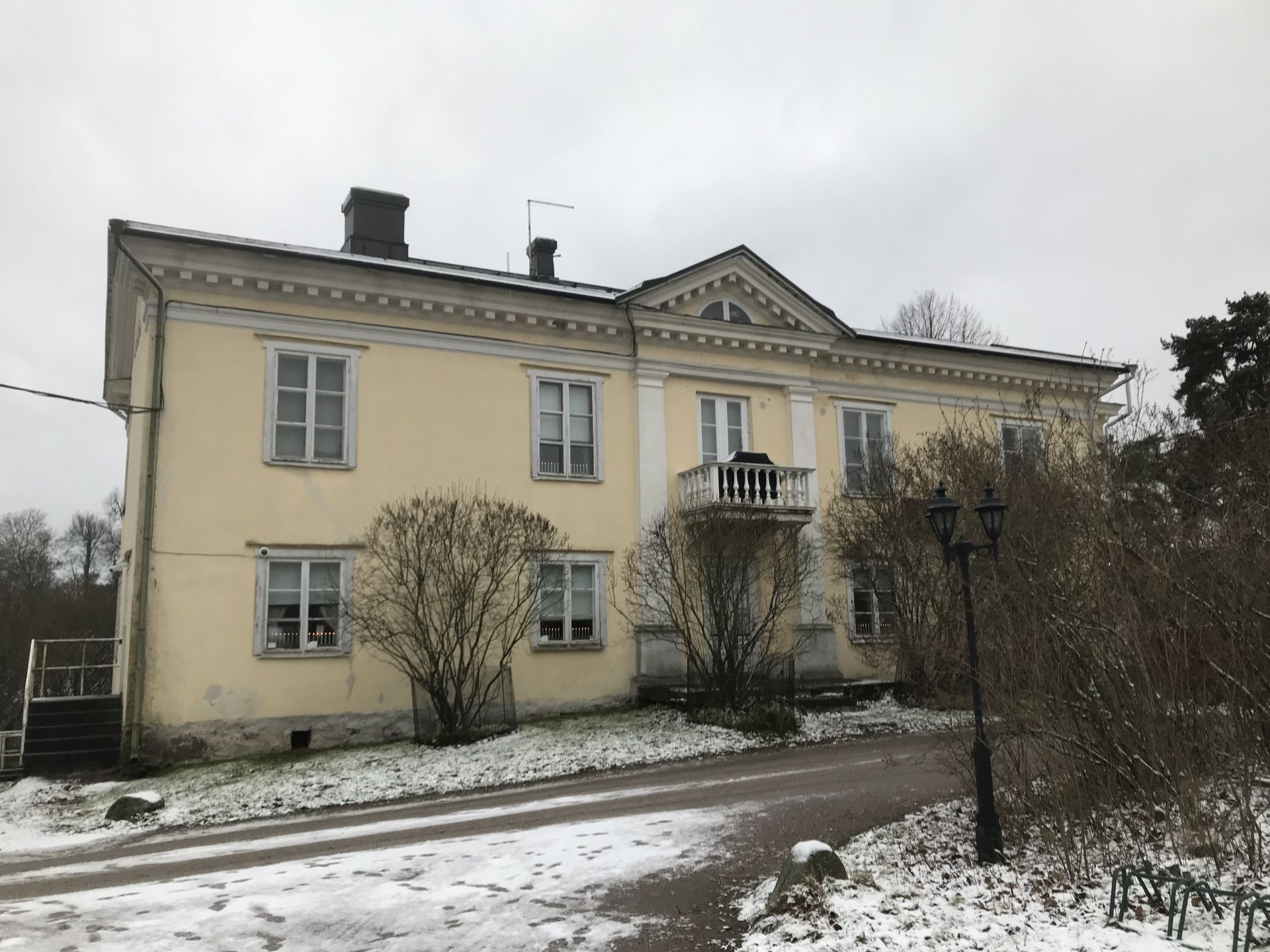 Pompeii’s discovery became very popular. Visitors from all over Europe travelled to the spot to look at the finds themselves. The big popularity of the Antique Roman and Greek periods was reflected in society during the Enlightenment in the 18th century. In Sweden the style is called Gustavian. The enlightened monark king Gustavus III of Sweden visited the site himself during his trip to Italy in the early 1780s. The main building at Hertonäs Manor is designed in Late Gustavian style by the Swedish architect Pehr Granstedt. The main building was finished in 1815. The simple lines at the outer walls and the roof reflect the ideals of the Ancient Antique period.

It is best to start the visit at the manor upstairs. Here is an exhibition about the Vice Admiral and Commandant at Viapori sea fortress, Carl Olof Cronstedt, and his family. They lived on the manor in the beginning of the 19th century. The room displays walls like white marble and objects that represent the style and ideals of the Gustavian era. The professional guides especially point to the furniture that Carl Olof Cronstedt got after the battle of Svensksund in July 1790. This battle between the Swedish fleet and the Russian fleet led to an important victory for king Gustavus III of Sweden and Carl Olof Cronstedt. The chairs have legs that resemble Antique pillars. There is also a Gustavian lit au polonaise (sa bed) on display. The general feature in the style is to strive for Classic simplicity in the forms and use Antique decorations. 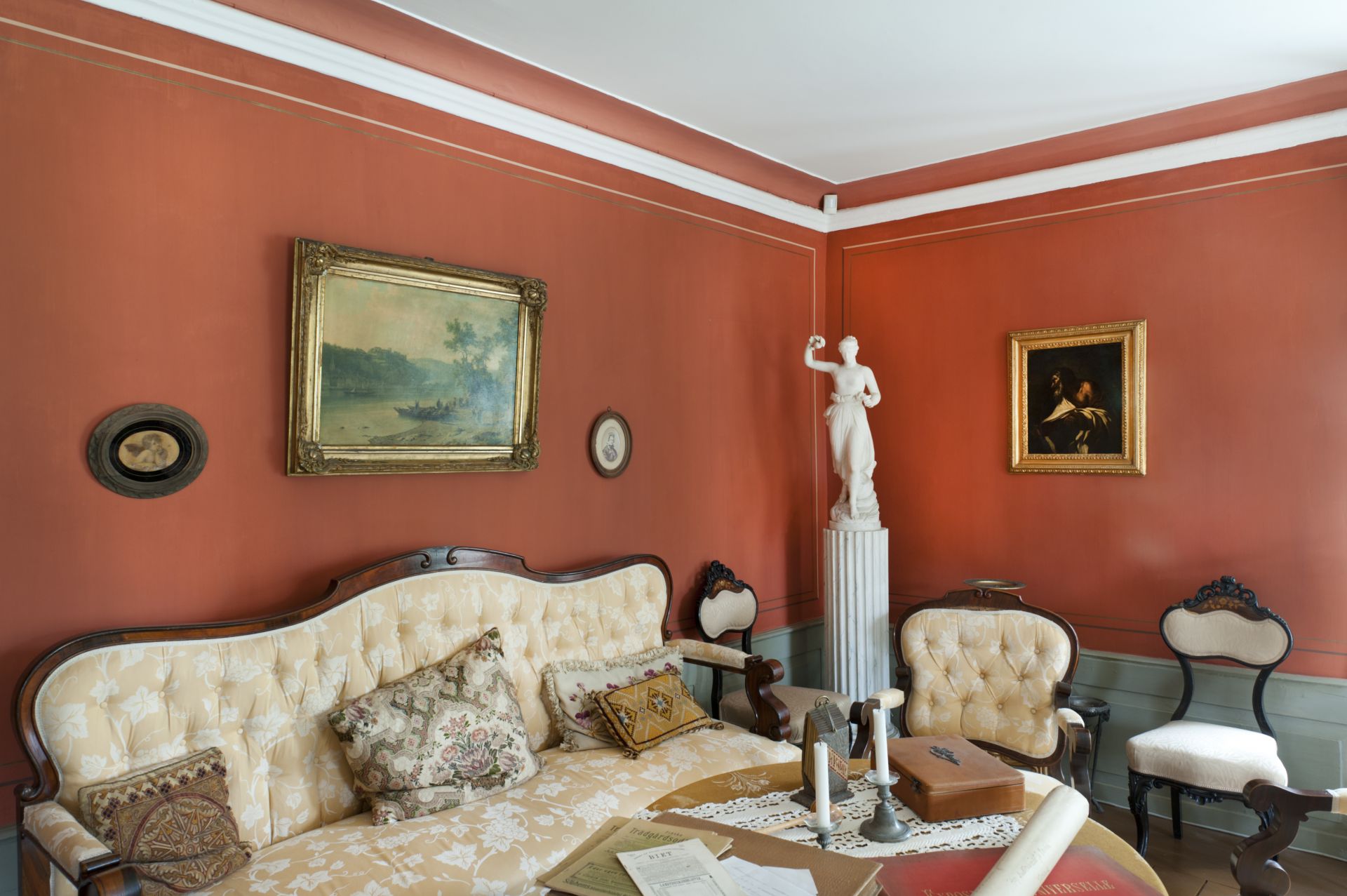 The Pompeian red walls on the floor of the main buildning. Photo: EAW 2020.


After this the visitors move to the ground floor. The bourgeois family Bergbom lived at Hertonäs Manor from 1859 to the time of Finnish Independence. The two main connections to the Antique era are in the salon. The Finnish photographer Signe Brander visited Hertonäs Manor in 1911. She documented how the room looked like at that time. The room was restored in 1997. Since then it is furnished as close to how it was at the time of the Bergbom family. The walls have the same Pompeian red colour from the early 20th century. The colour refers to the red colour with an orange nuance that was found in the houses of Pompeii before the volcanic eruption. The room also has two pillars, as well as the other, green salon. The pillars imitate pillars from Ancient Rome or Greece, in Ionic and Doric style. 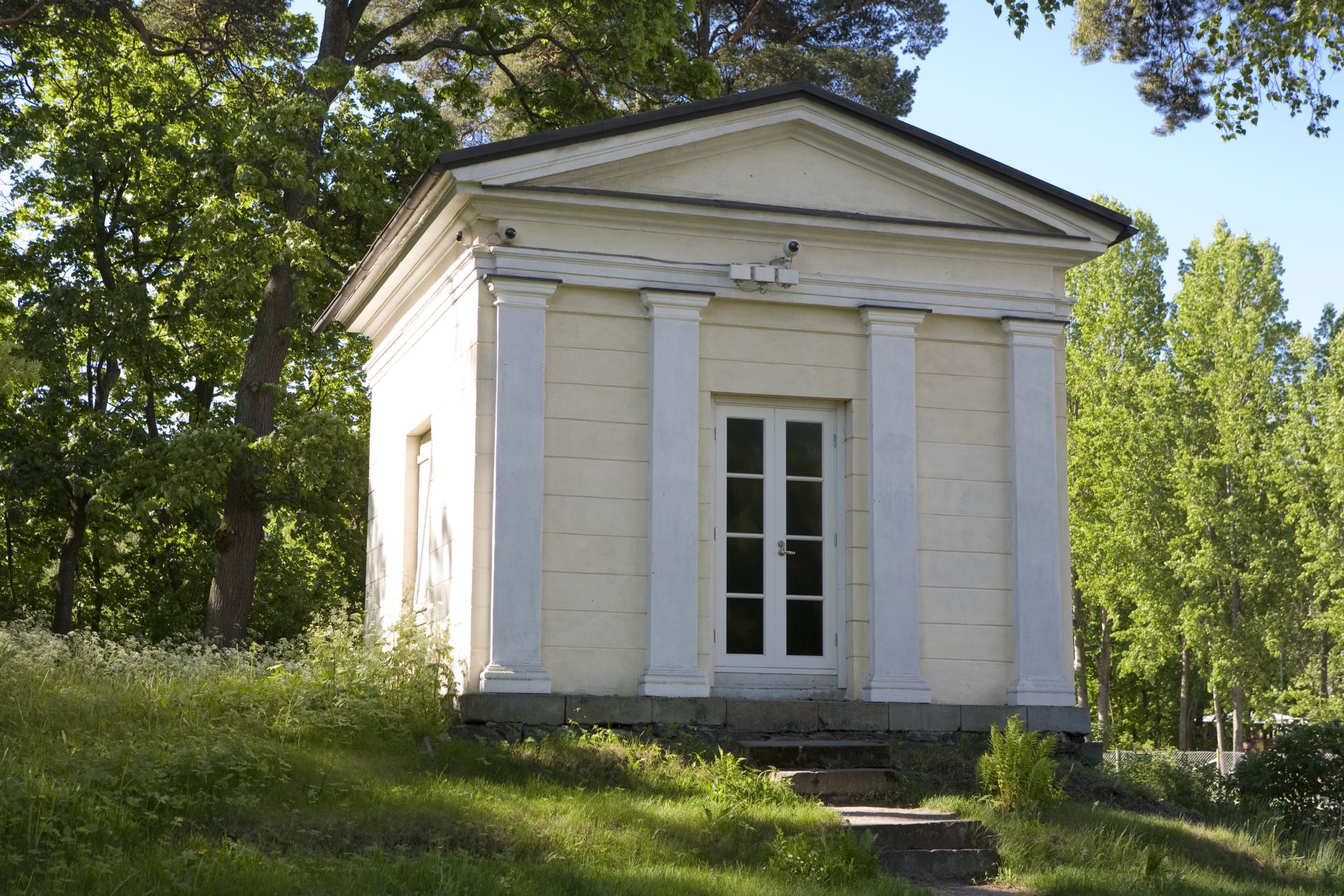 One of the gazebos in the Barock park at Hertonäs Manor resembles a Greek temple. Built in the 1810s. Photo: SOV.


Hertonäs Manor has two parks. One of them represents the Baroque garden that was inspired by the Ancient Antique period. The interest for the era began during the Renaissance in Italy. The Antique virtues were applied to the garden in its geometrical forms and symmetrical patterns. The French Baroque garden represented both power and dominance. Carl Olof Cronstedt built the park in the 1810s. It is possible that he also founded the other park next to the Baroque garden, and English park. The parks have gazebos. In the Baroque park the gazebo is square shaped and in the English park the gazebo is octagonal. Both gazebos represent the Neoclassical style. They might be designed by architect Carl Ludvig Engel.

The theme is also presented in 2020 in another blogpost in our blog, clik here.