162833916007.08.2021 hrs 15:26
During the last five years I have worked with museum pedagogy at the Hertonäs Manor Museum, mostly as a museum guide. During this time I have had a lot of interesting experiences - the job is never boring! Read more about my experiences below!

Due to the fact that the Hertonäs Manor is a small museum, us guides have lots of different tasks aside from telling visitors about the history of the manor. We open and close the museum, manage the cash register, sell the museum’s products and serve customers. We oversee the exhibitions and also participate in the historical performances made by drama societies DOT and Tarinalyhty. This is always fun! In those plays, the guides fortunately do not have many lines, so it does not matter if we are not good at acting. However, the actors are always enjoyable to watch as they bring historical figures from the past such as Helene Bergbom, Carl Olof Cronstedt and Knusbacka’s mistress to life.

Among the more interesting guided tours I have held was one where something special occurred when we arrived with the group to the English garden. As I told the group that this was the spot where the famous scene from a Finnish movie, Katariina and the count of Munkkiniemi [länk], was filmed, and where the actor Leif Wager sang the song Romance [länk], a young man suddenly burst out into song and sang the tune for us. It was a fantastic moment!

Another guided tour to remember was one where I had to use all the languages I speak fluently; Swedish, Finnish and English. The tour was ordered by a big family that had come together to celebrate a birthday. Some of them only knew Finnish and others only knew English. A few elderly relatives from Sweden could only speak Swedish. It was not easy to tell the manor’s history in three different languages, but in the end it went fine, and it was an enriching experience. To be a guide is a very social job and you learn how to improvise and quickly adapt to different situations. As a guide you must also accept that it is impossible to know everything about a subject. You must realize that even if you are very well prepared, sometimes the visitors ask you questions that you cannot answer. In that case, you just have to respond that you unfortunately do not know the answer but that you will try to find it out. You could also ask your colleagues if they possibly know the answer.

When the actors take over, the manor transforms into a historical scene. I remember when DOT performed their play 1917 that commemorated the centennial of the unrest before the Finnish Civil War of 1918, and the time when the last lord of the manor, Johan Bergbom, was murdered. Lady Helene Bergbom strolled restlessly around the parlor, fearing that her husband would suffer the same fate as many other landlords in the area already had. On the outside red activists ran around distributing pamphlets about workers’ rights. Thanks to talented script writers and actors, it really felt like you were transported a hundred years back in time.

Evidently the covid19-pandemic has influenced our work during the past year - it is not possible to work from home as a guide. Luckily we had the possibility to keep the museum open most of the time even if the season started a month later than normally in 2020. The groups on the guided tours are smaller, max. 10 people per group, as we had a limit of  25 people before the pandemic. There is one benefit with a smaller group: it is easier for the guide to interact more with all the visitors, which is something I appreciate! At first it also felt weird to speak with a mask on, but now we've gotten used to it. We can consider ourselves lucky to be able to keep the museum open in spite of the pandemic, and share the exciting history of the manor with our visitors. 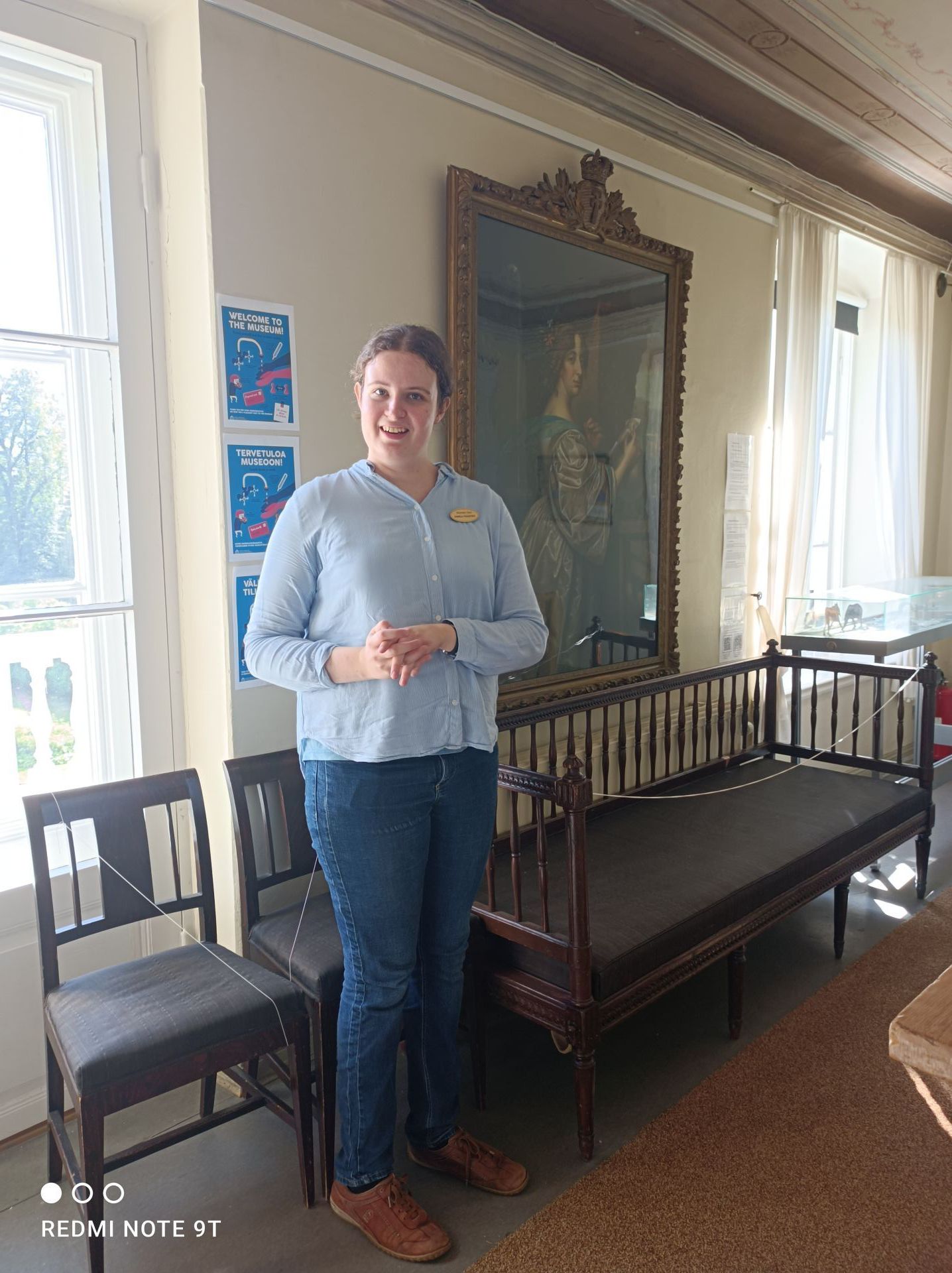