162721602025.07.2021 hrs 15:27
I started my internship at Hertonäs Manor Museum on the seventh of June 2021. Up to now I have catalogued over 1000 photos (more than 60 collections) from the picture archive of Hertonäsi Manor to the Desky website. There are still more photos to catalogue and later this summer the physical collection needs to be photographed and catalogued. When I catalogued the collections, I bumped into a collection of photos of a movie that has been filmed at Herttonäs Manor. The name of the movie is The Old Baron of Rautakylä (Swe. Gamla baron på Rautakylä, Fin. Rautakylän vanha parooni) from 1923. Read more down below!

Working at Hertonäs Manor Museum has been a very informative experience for me. Besides the internship giving me experience working in a museum, I have also learnt much history about Hertonäs Manor in Herttoniemi and Helsinge municipality. Photos I have catalogued have been taken in Hertonäs Manor and Helsinge municipality during the 19th, 20th and 21st century. A lot of movies have been produced in Finland in the early 20 th century and The Old Baron of Rautakylä is one of them. The movie was produced by Suomi-Filmi and it was partly filmed at Hertonäs Manor. The movie is directed by Carl Fager and in the leading roles are Adolf Lindfors as the old baron and Naimi Kari as maid Lisette Hallström. The movie premiered on the first of April 1923. The movie runs at one hour and nineteen minutes. The old baron of Rautakylä is a silent film. The movie is based on Zacharias Topelius’ novel of the same name from 1849 (available to read on SLS's website). 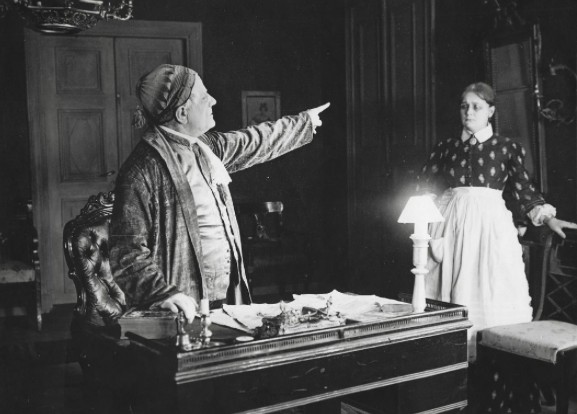 The Old Baron of Rautakylä is also the first Finnish horror movie. There was in the collection 18 black-and-white photos of the filming at Herttoniemi and in Helsinki. The photos resemble different scenes from the movie. Many of the photos are taken inside a studio in Helsinki while the outdoor scenes are taken in Hertonäs Manor with actors dressed in late 1790s (neoclassical) costumes. The scenes indoors consisted mostly of photos of the main actors Adolf Lindfors and Naimi Kari in their roles in the movie. 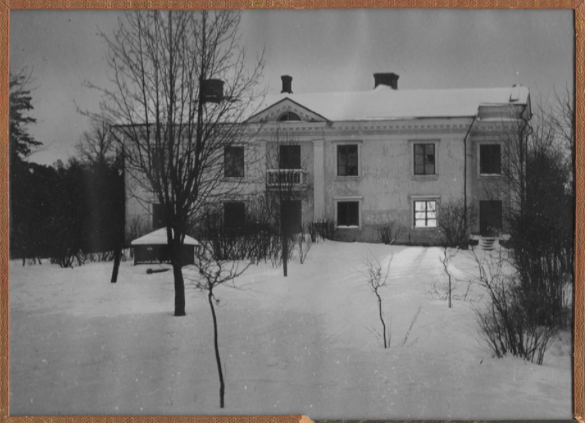 I love watching movies and knowing the history behind them. The Old Baron of Rautakylä was a movie I never had heard about. I did not know the movie is also the first Finnish horror movie. For movie fans, it is an interesting thing to know about the history of the Finnish movie industry and history of Hertonäs Manor. Imagine that the first Finnish horror movie has been filmed to an extent at Hertonäs Manor! The movie can be seen for free online, due to the fact that it is included in collections of the National Audiovisual Institute.

I have catalogued over 1000 photos to the website Desky in Hertonäs Manor Museum. Picture by Karl Heikkilä 2021.

Karl Heikkilä’s internship at Hertonäs Manor Museum has been financed by Svenska kulturfonden.